Home Oilspills What you need to know about oil spills?

What you need to know about oil spills?

An oil spill is the leakage of hydrocarbon materials such as petroleum or other material used as fuel. It may be due to natural or human activities. Oil spills are more commonly related with the marine ecosystem rather than the terrestrial region.

Oil spills are a major concern for environmentalists since the findings of petroleum and other hydrocarbons. Due to the strict environmental regulations now the problem is somewhat sorted but still there are certainly small and major issues which need to be taken care of.

Also by the liberation of oily and greasy material from the industries, the aquatic ecosystem is disturbed. Oil spills are a form of pollution that can be due to natural or human activities.

Oil spills are a major problem along the ocean or coastal areas. But it may also occur along the land area.

Along the ocean or coastal areas, oil spills can be due to natural causes, Human-induced, or accidental release. Oil forms by the decay and decomposition of the dead bodies of organic materials and organic debris. Such oil gets stored within the sedimentary rocks. Due to changes in climatic conditions or by the erosion of sedimentary rocks, such oil can spill out.

Natural disasters such as Hurricanes can also be the reason for an oil spill to occur.

Generally, petroleum and natural gas are explored along the off-shore regions. Often structures such as drilling rigs, wells, platforms, and tankers are utilized during such exploration activities.

Oil spills may enter the land ecosystem due to the release from tankers, offshore platforms, drilling rigs and wells.

Also, intentional activities by the terrorists or even between countries at wars could be the reason for the spillage of oil into the oceans.

How do oil spills affect the environment?

The oil spills can have severe impacts on the biotic community as well as on the abiotic factors, thereby affecting the whole ecosystem. 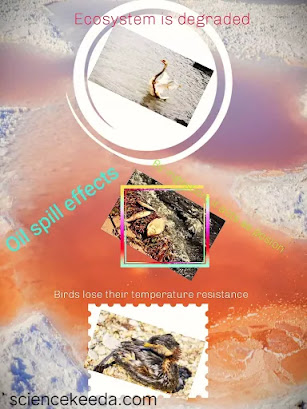 The impacts of oil spills depend on certain factors. Let’s suppose the spillage has occurred within a limited coastal space. Because of the less space availability, the process of dispersion does not occur. Thus, it affects a large percentage of biota.

If the spillage has occurred within an open sea, a large space is available and the dispersion of oil is possible. Thereby, the effects on biota gets reduced.

Each and every organism, genus and species will experience varying impacts. The direction of wind and currents can also be devastating if the polluted water is brought to the shores.

The spill will release hydrocarbons that may contain certain toxic elements such as benzenes, toluene, polyaromatic hydrocarbon and oxygenated polycyclic hydrocarbon.

Hydrocarbons can have devastating effects. Hydrocarbons may give their contribution in environmental issues such as greenhouse, climate change, it may be responsible for depletion of ozone layer.

Such toxic elements get oxidized by the oxidizing agents present in the atmosphere and it results in the formation of particulate matter.

Such particulate matter on inhaling is having a high vulnerability of respiratory diseases.

During the recovery process, hydrocarbons generate air pollutants such as nitrogen oxides and ozone which are having bad impacts on the environment as well as on mankind.

The countries which are dependent on tourism to a great extent and if such countries experience oil spills, tourism is exponentially blown away.

Blankets of oil prevail along the divine beaches and the shores. Such oil blankets may percolate into the sand on melting by the extreme heat during the summer. It makes the sand deposits heavy and greasy. Thus, the intertidal ecosystem gets modified.

Phytoplanktons cells may get covered with the greasy material. Not each species will get affected in the same manner. Green algae is more sensitive to hydrocarbon as compared to the diatoms and blue green algae. Phytoplanktons can absorb oil but cannot transport inside the body.

Zooplanktons which are residing near the surface of water are largely exposed to such events compared to the pelagic animals. Such animals may ingest such polluted water and the tar may get accumulated in the gut of the animal. The oil affects the metabolism of the animal.

Animals who rely on the smell to find their natives are not able because of the strong smell of the oil.

The body of birds might get covered with the oil mats. Ingesting the oil may irritate the digestive tract and can cause harm to the kidney and liver.

If the oil penetrates within the plumage of the birds, they lose their resistivity towards temperature and also the buoyancy of the birds.

The oil spills also have economical impacts. The production of fisheries and other aquatic resources is lowered due to the destruction. Oils also prevent the recolonization of animals. Coral reefs, oyster beds and mangrove communities also get affected.

Human life is indirectly affected. By consuming the sea food, mankind is exposed to the hazardous impacts.

The clean up processes utilize certain chemicals as dispersants. Such chemicals cause additional harm to aquatic life.

Additionally, the ecosystem gets altered. Thus the oil spill can have a long term effect.

Clean up and recovery processes are quite complicated and are not 100% accurate. Depending on many factors such as type of oil, temperature of water, the types of beaches and shorelines different processes need to be taken into account.

Bioremediation: it is the process of breakdown of oily matter by the biological agents and certain bacterias. There are three types of oil eating bacterias- sulfate reducing bacteria, acid producing bacteria and general aerobic bacteria.

Sometimes bioremediation accelerators are put on to accelerate the process.

The other clean up process undertaken is the supervised burning of the oily material. Such a process can be hazardous also sometimes and also generates secondary issues such as air pollution.

Skimmers can be used as a response to the oil spills. Such skimmers remove the top layer of the oil making water clean to a limited extent.

Solidifiers such as dry ice(solid carbon), hydrophobic polymers and materials are used. Such solidifiers convert the oily matter into semi-solid or solid form. Such solid form is easy to handle and also it does not allow the leaching of oil matter.

Wood sponges can also be used to absorb the oil and such an absorbed oil can be reused.

Spreading: it is the first important process that will occur after the spillage. The spreading rate of the oil will depend on the nature of oil, the extremity of winds, currents and waves.

The oily matter will now not be continuous but it will become patchy.The extremity of wind, waves and currents will determine the shape, direction and movement of the oily matter.

Evaporation: evaporation is quite an interesting process for the degradation of oil spills. It depends on the composition of oil, surface area and physical property, intensity of solar radiations and wind velocity etc.

If the oil which has spilled has less than 250℃ the oil evaporates within 10 days. If the boiling point is between 250℃-400℃ limited volatilization occurs and above 400℃ volatilization is not possible.

Photooxidation: it is the process of oxidation in the process of sunlight. However the process is slow. Certain compounds within the petroleum products get oxidised to ketones and aldehydes and ultimately to the carboxylic acids.

The nature of the oxidized product is hydrophilic and thus they change the behaviour of the spill.

In the dispersants process certain chemicals are sprayed for inducing the breaking of oil blankets into patches.

Dredging is the process which can be used after utilizing solidifiers. As the oil becomes denser, it gets settled in the bottom. Through dredging the solid material is excavated.

Dissolution is the process of partial loss of some hydrocarbons from the oil into the water. The process depends on properties of oil and physio-chemical conditions of the prevailing environment. 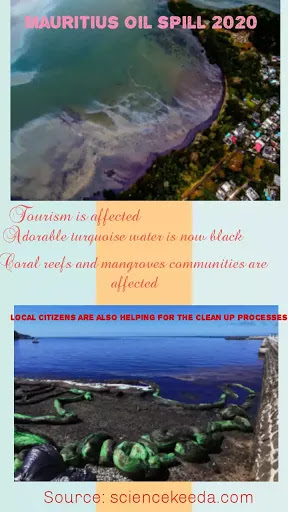