All you need to know about air sampling (basic processes)

Air pollution is an extreme issue nowadays particularly in urban areas. It has many devastating effects on human health and nature.

Air sampling is a process by which the known volume of air is collected through various methods. The air can be collected for analysis of different size particles.

Things to be kept in mind for sampling: 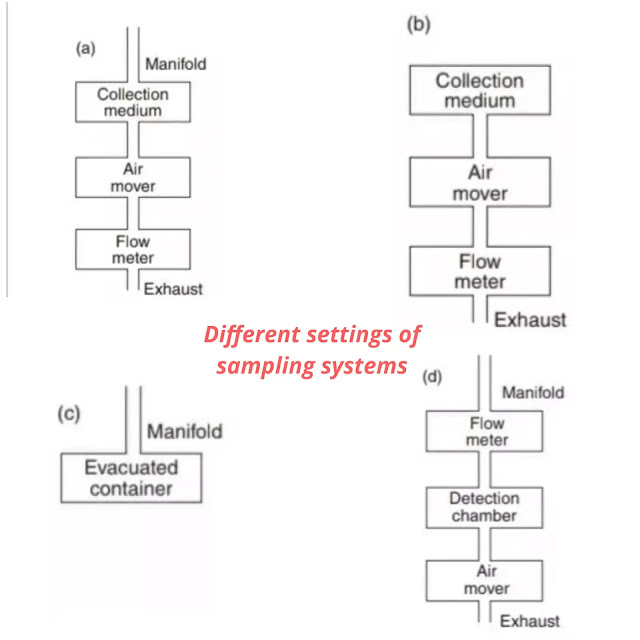 Major components of the system:


Inlet manifold - transports material from the atmosphere to the collecting medium. It should not be of such an element which can react with the gases and can alter the sample.

Air mover - provides force to create a low pressure at the end of the sampling system.


Collecting medium - it is a liquid or solid sorbent for dissolving gases or it can be a filter for capturing the particles.


Flow measurement device - it measures the volume of air associated with the sampling systems.

Two types of methodology are adopted for the gaseous pollutants


Bubbler system: in this process, liquid sorbent is used as a collecting medium. The gas thus collected undergoes the process of hydrolysis or reaction with water.


The consequence of such a reaction is formation of cation and anion which are tracked by the analytical equipment.


Solid sorbent system: in this process solid sorbents such as tenax, XAD and activated charcoal are utilized. The gaseous hydrocarbons gets trapped inside the active sites of such sorbents.

When the sample gets collected in the active sites, two processes are used for the recovery of hydrocarbons from the sorbents.


The tube is heated and a stream of inert gas passes through it. The adsorbed particles get de sorbed and are carried out of the tube with the inert gas which is then applied for gas chromatography.


Liquid extractions from the sorbent are applied for the process of liquid chromatography.


For making the process of recovery easy, sometimes conversions are required. Carboxylic acid is converted to methyl ketone for ease of extraction.


Collapsible bags: such bags are made up of polymer films and can be used for collection and transport of samples.


Air is pumped in the bag by an inert pump or air may be sucked into the bag by placing it in an airtight container which is then evacuated. This forces the bag to expand and draw the air sample.


In situ sampling and analysis: 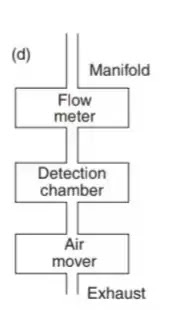 This approach is also improving for organic pollutants.

Three things are to be taken into account for designing a system for particulate matters.

As for example, for particulate matter with an aerodynamic diameter less than 10 micrometer PM2.5 sampling method is used.


The primitive notion is to separate the particles from the known volume of air and later on subject to the procedures of weight determination and chemical analysis.


For extraction of particles from the volume of air two methods are adopted.

As the size of particulate pollutants increases, the behaviour of particles at sampling inlets becomes an extremely crucial point in the designing of a sampling system. 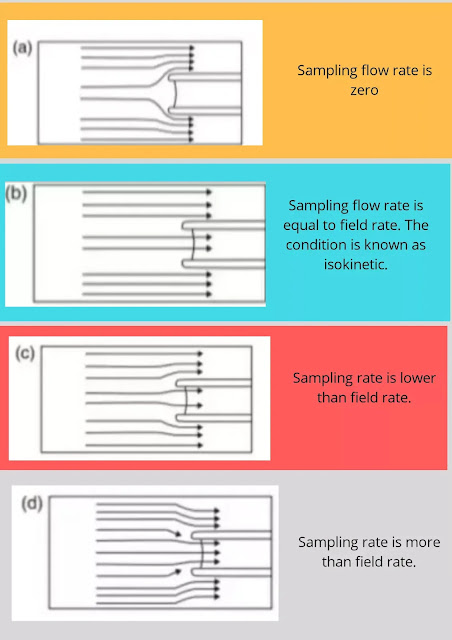 
Other problems such as gravitational settling of larger particles, impaction on walls, migration towards walls of non conducting material due to electrostatic forces and also the problems of condensation and agglomeration happens.


All these considerations are to be taken care of during designing of a sampling system.

Such sampling systems do not have an air moving component or rather air mover such as pumps. Thus, the term "static" is used.


Passive sampling systems do not give us the accurate quantity. Such systems are at work in occupational environments and also to measure the exposure levels in the general community.


As for example it can be used to measure exposure levels of radon gas in residential areas.


Advantages of using passive systems are:


For designing a passive sampling system, two principles are used.


Permeation
According to this principle, the ability of gases to permeate through various polymers at a fixed rate depends on the concentration gradient.

Systems can be designed for specific compounds by selecting the accurate collection medium and polymer membrane.


The permeation constant is defined as the product of concentration in ppm and time of exposure divided by amount of gas absorbed in micrograms.
K = Ct/m